The Cold Lights of Kuala Lumpur 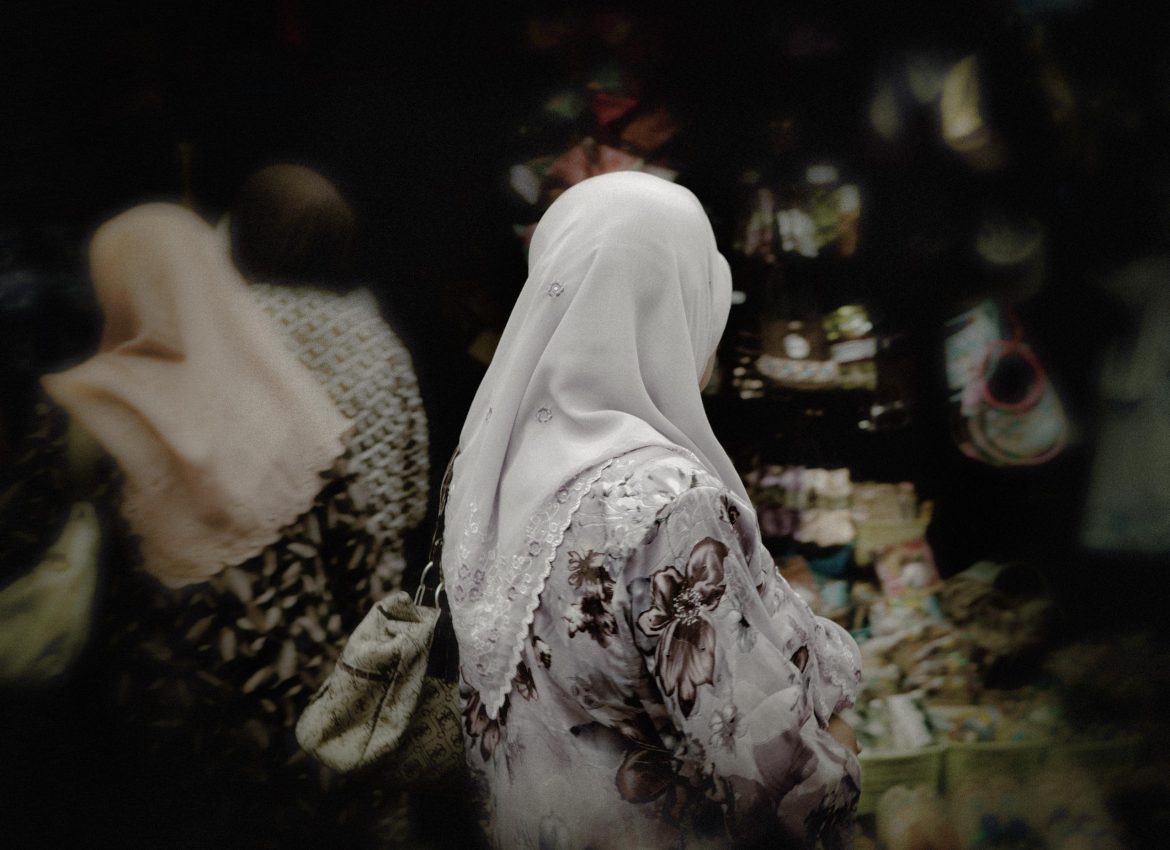 Federico Garibaldi is a curious person in both senses; that he stirs great interest in getting to know and that he himself, perpetually lost in thought, induces thought. His photography is that of a constant need for investigation, introspection and enjoyment, therefore causing him to continuously shift, with success, between art and fashion. Maurizio Baruffaldi, the renowned Italian author, writes about him, “He is a thief, an artisan, an artist and a counterfeit… artist, since he constructs the photographic scenery to suit his needs. Twisting the necessary elements to his desires to say that which he wants them to say. Tenacious, meticulous and visionary, he gives life to an idea which does not lend itself to being explained. An idea which suggests and reveals. That resembles something, or that to which he would like it to resemble. He is a counterfeiter. As he uses the people that already exist in those places, he spies on them, they know he is there, he takes nothing, just copying the idea and making his own version of it. He directs them, meaning that what seems natural is no longer so. He takes a canvas and paints the cover; his photography clings to the picture. His vision is both abstract and figurative, capturing a room full of criss-crossed laser rays, or the metallic depth of a mattress creating a graphic hallucination.”

Garibaldi has recently held his first personal exhibition at the prestigious Galleria Statuto13, in the heart of Brera, Milan. Two of the photos exhibited were taken on his recent trip to Malaysia. We have asked him to tell us about the trip and present you once again with those very photos.

Kuala Lumpur is hot. A heat full of el suono diasec 200 x 130 blue and redundant voices. A heat of infinite markets, expert merchants and thousands of fluorescent lights. When the alarm clock rings, that first morning of intense mugginess was for the dead of night, I thought I had been dreaming in vain. Surprisingly they spoke English on the telephone, and I barely understood a word. Late. I then isolate a second. The Minister. I then truly become aware of the value of a short sentence. It is not good to make the minister wait. Just as in an old tale taken from the great Russian literature, in the blink of an eye the vision becomes clear as day.

My first Malaysian dawn is by no means dawn at all. I, hostage of sleep until ten in the morning, caress the shadows of an awful shape. I wake up. I make haste. I reach the hall, the delegation, the interpreters. I must say “pleased to meet you” a thousand times. I arrive perfectly on time for my appointment with the Minister. Whilst I shake his proud hand, I understand that in Kuala Lumpur it will take ten days for my listlessness to pass. I course through a lively city, though not a hysterical one. Energetic, but not neurotic. Poetic, but not exotic. There where I turn my gaze, I sense the nostalgia for the photos I will be taking. I won’t be shooting the odours of the city centre streets. I won’t be able to capture the racket of the covered markets. Perhaps not even the sense of pervading smiles I suspect that life in a metropolis both gives you and hides from you. Yet, when you take a photo, you choose a moment, killing what comes before and after. That which the eyes do not see is very difficult to remember. Of Kuala Lumpur I will remember the profound sense of great normality in the eyes of its people. The simplicity of their gestures that help me to tell a story without inquiring, that innate human ability to be able to sit at the same table of the Iron Age and that of Facebook. I don’t like to spy, and at the same time I don’t like to cry. I have opted to become part of the crowds, which lets me tell of the simple flow. The older generation of Kuala Lumpur are the same as those of my birth city, perched on the Ligurean Sea. Their eyes are the same eyes. Their smiles, the same. Also at night time. Even when in a semi-deserted market, I surrender to sunrise, a boy stops me and asks me, what I believe is the question of how much my bulky camera costs. The astonishment in his eyes – to my response – is a magnificent photo I hold on to. How much it costs stops time. 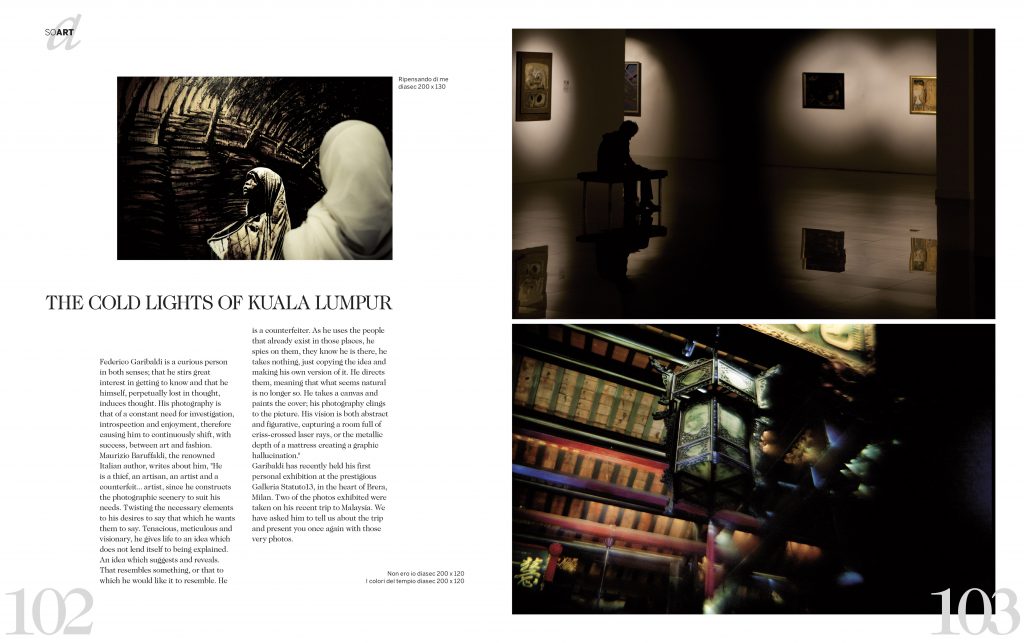 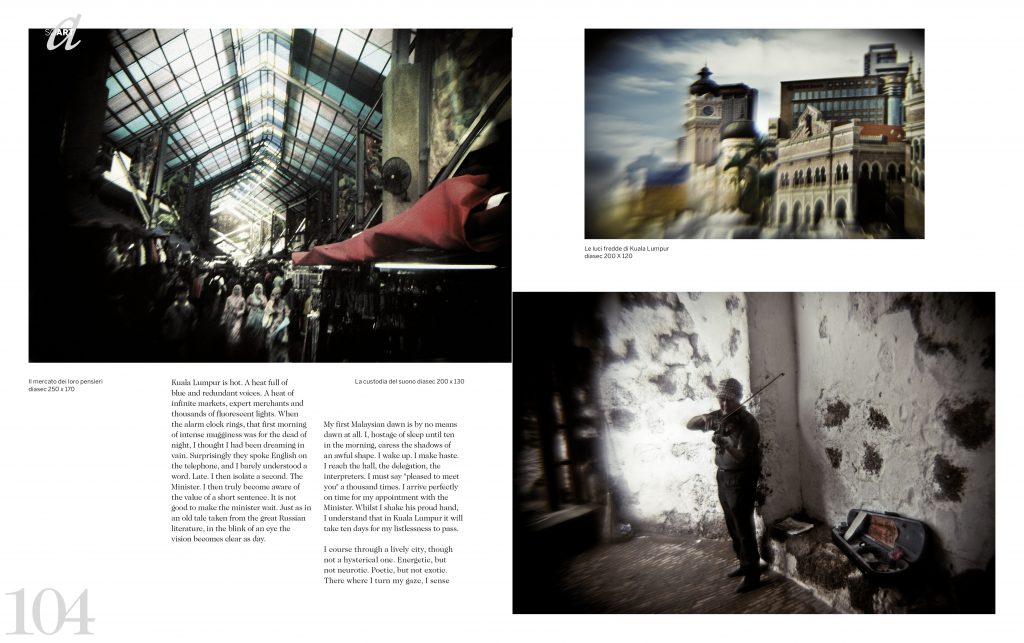 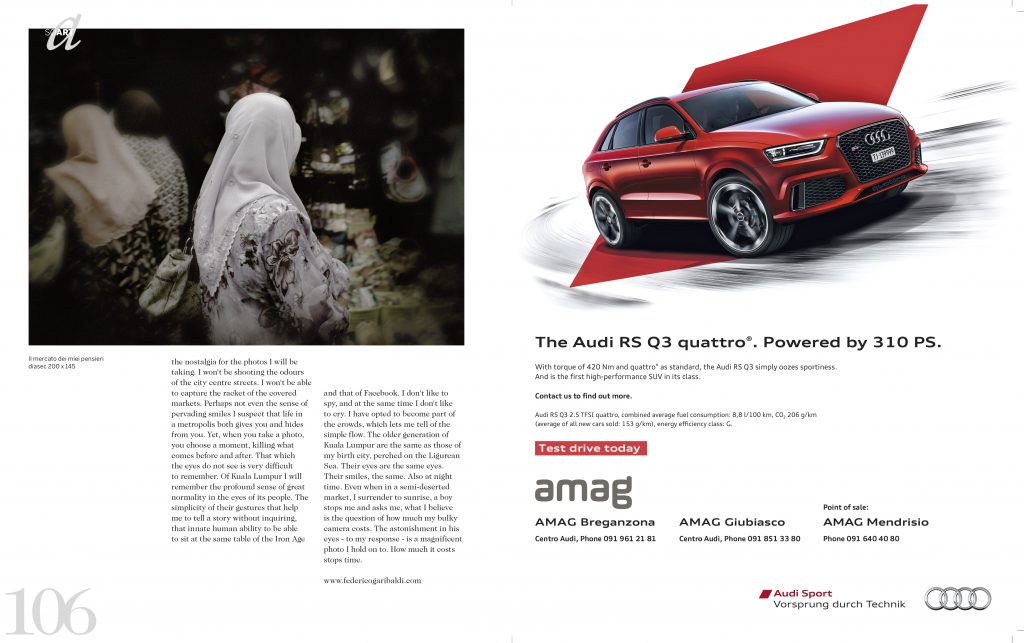